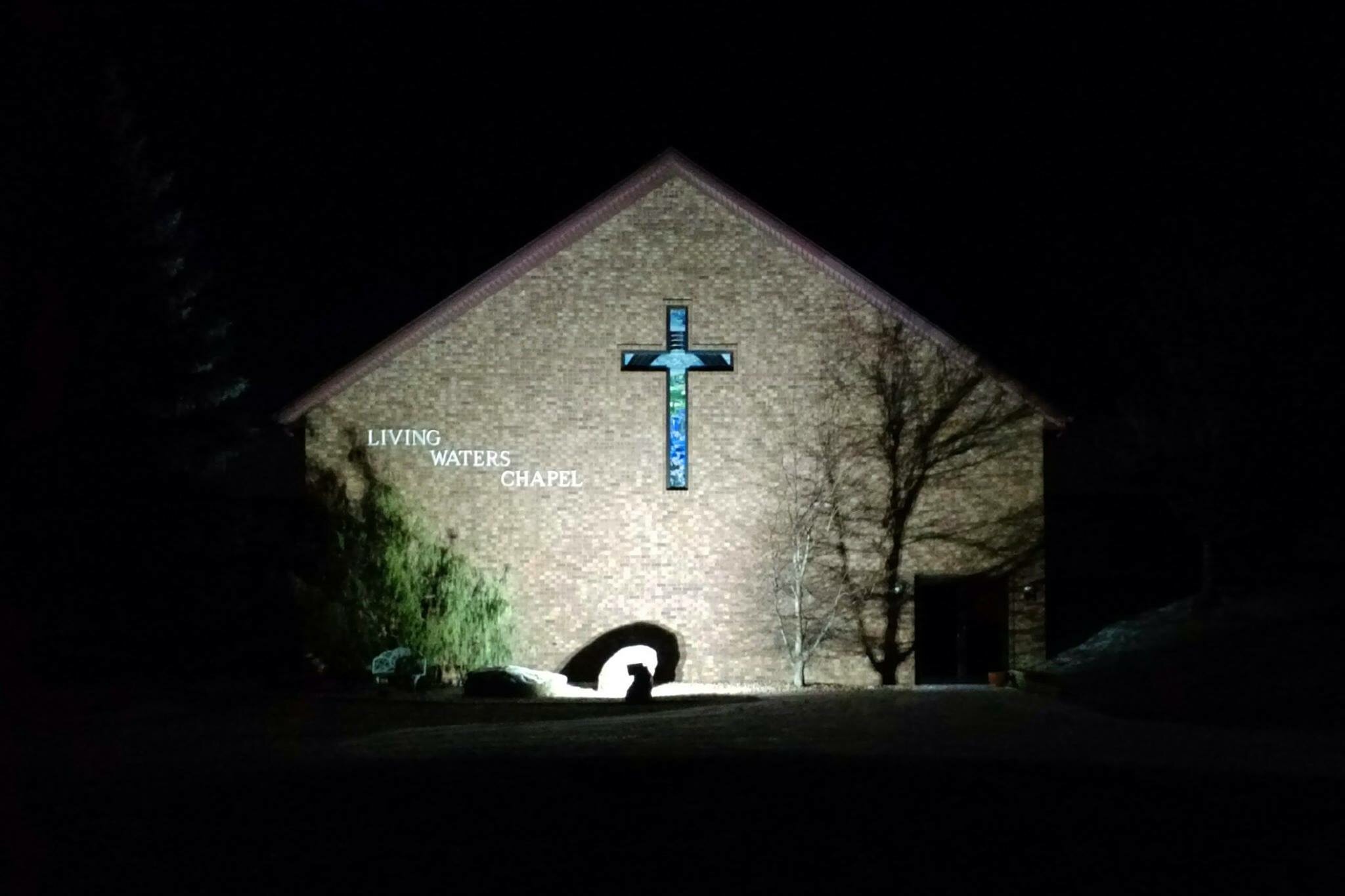 Story Behind the Making of the Cross

Do you realize, that God hears and answers even off the cuff remarks; uttered before we know Him or ask Him into our hearts. In 1979 I saw a beautiful stained glass window. It was a least 10ft. wide by 8ft. high and had a large wood tree in the center. As I looked through the branches of the tree I could see flowing magnificent color and scenery. I had done some stained glass work, but never anything like this. I just stood there for a moment, then I went to see the workmanship up close. I was still amazed. Someone really knew what they were doing and had created a real masterpiece, such detail. I stayed a few minutes longer and as I turned to leave I kind of muttered softly, yet out loud. “Lord it sure would be nice if I could make a window like that, some day.” Then I forgot all about it. The possibility of that happening would have been like, me having a million dollars, fat chance!

Well, God knew better! Ten years later there would be a pastor planning a new building who would have a specific desire in his heart. In 1989 the pastor of our church and some board members had been to Gaylord and had seen a stained glass window in the shape of a cross. They were so impressed, so excited! The cross they described was 16ft. tall and had a vine that appeared to be growing around it and flowers growing from the vine throughout the cross. It was so beautiful, they said they had never dreamed anything like it even possible. Oh, it was just what they wanted in our new building. Overcome with joy, Pastor Solomon and the board were in contact with the pastor up north. They were sure they would be able to get a copy of the pattern from which the cross was made. Now guess what they didn’t know? They had someone right in their congregation with an enormous mouth and giant feet too; ME! Little did I know that this time not only would my feet go in my mouth, but my knees, hips and shoulders also. Committed? No, more like submerged, I think! Pastor wanted Sherry and I to go up to Gaylord and look at the cross. I kept on putting it off because I really didn’t want to. I just believed that Pastor would get the pattern and I’d make it. Well after about three months and asking several times, “Mark have you gone up and seen the cross yet?” Pastor came up to me after service on Sunday and asked, “What are you and Sherry doing after service next Sunday?” And me not thinking said, “nothing.” Boy, he jumped on that like a cat on a mouse. Good “then after service Priscilla and I will treat you and Sherry to dinner and we will ride up and look at the cross, in my car I’ll drive. How will that be, OK? Pastor does not have to know how to spell Gotcha! He just does it naturally.

We went up to see the cross and I have to be honest. It was pretty, I just was not as impressed as they were, because I had seen a lot more detail done with stained glass. But I was so convinced that Pastor had made up his mind concerning that particular pattern. I felt free to express my thoughts safely on the way home without hurting anyone’s feelings. I found out real quick what I thought was set in stone was not. I opened my big mouth about detail and what I felt could be done and he immediately accepted it and gave me the job. Did I have a particular pattern in mind at the time? Most assuredly, no! I didn’t have the foggiest notion. And of all things Pastor up and gives me a free hand. The only stipulation, a dove in the center of the crosspieces. I told sherry, my mouth, my mouth has done it again. Why, for weeks I didn’t know what I was going to do much less come up with an idea that made sense. Then I remembered the window and the prayer I muttered softly years earlier. God heard and now was giving me the desire of my heart that I had been so nonchalant about 10 yrs. earlier. A pattern and colors were no longer a given. All would have to be developed from scratch. All had to agree on the end result. Vision and ideas needed to be transferred to others. God blessed me with my wife Sherry and Marion Inch, a close friend to work with right from the start. At times either Bill McCool or Arlene Moore would stop by to do whatever they could also. The pattern alone took almost six months to develop. Sherry and I worked full time jobs and could only work on the pattern when we were not involved in something else. The pattern was done in three separate sections. Each section had it’s time spent on our dinning room wall. All ideas were transferred to paper by Sherry and then scrutinized by the three of us for acceptance or rejection. When something was right all three would know it at the same time. All three of us would get these big grins on our faces and the girls would start squealing: that’s it; yea that’s it!

God gave me two women who were jewels to work with. We had good times of laughter good times of praise and not one complaint through the whole process. The use of past tense is because Marion has since gone to be with the Lord. But my, was she ever a blessing. After the pattern was complete it had to be copied again, this Sherry took care of. Now each individual pattern piece needed to be cut out. Each leaf two pieces, each bird feather, beak, eye, etc. - wherever there would be a seam or a solder line had to be identified and cut out. We ended up with 485 individual pieces and maybe a few more. Some no bigger than an eighth of an inch in diameter. These were all cut out by Marion and Sherry by hand. The glass came in various multicolored sheets 48in.x36in. Each pattern piece was placed on the glass and then examined to determine the specific color needed as the sun shown through it. Then each pattern piece was transferred to the glass individually and cut out by hand. The edges of each piece were then ground smooth and fitted onto the pattern. It was like a giant jig saw puzzle. Next each piece was taken cleaned and wrapped with self adhesive copper foil and then placed back on the pattern. Each seam or solder joint was then reinforced with special reinforcing tape wherever possible. Now it was time to start soldering the first section. As with the development of the pattern each of the three sections of the cross was built separately by itself. First the main eight foot section; then the top three foot section and last the seven foot crosspiece.

The last piece of glass was cut and put in place on March 3, 1991. Each section was constructed on a 4ft.x9ft. table in our basement. I say this so that I can set the stage to relate to you just one of our trying moments. It was Saturday, the eight foot section was lying on one side of the table and I was finishing soldering the seven foot crosspiece on the other side of the table. My brother had come to see me and was talking with me as I was bent over soldering. I really wasn’t paying any attention to what he was doing. I would just respond to his voice as he moved around the room. At times silence, at others, from the other end of the room I’d hear; what’s this thing? He’d describe something and I would answer him. Then all of a sudden I heard a noise that put my stomach up in my throat. I straightened up and looked across the table at a face that was sick with guilt and shame. The mouth started to move and it said, “I’m sorry, I’m sorry! I never should have come! I should have just stayed home! Now look what I’ve gone and done! I should have left you alone brother! I shouldn’t even be here! How could I have been so stupid?” I still didn’t know exactly what had happened. All that I had responded to was sounded like glass cracking and it even could have been in the piece that I was working on. He said, “I wasn’t thinking or watching what I was doing. I leaned over with my elbows with all my weight right on the big rock in the section that you’ve got finished and it broke the glass right in half. I’m sorry, I’m really sorry I’ll get out of here right now! I should have stayed home; let you alone and this never would have happened! Sure enough the large rock next to the water fall was now two smaller rocks and would have to be taken out and replaced. But how could I be angry with him? He started punishing himself the moment it happened. In fact it took quite a while to convince him that it could have happened to anyone. I told him that it was all right; after all I had broken a piece in the water fall myself and still needed to repair that. What I didn’t tell him was that I had no idea where I’d ever find the exact type of glass or how to do the repairs. I mean come on now; I’d made lamp shades before; never a window. This was a case of; come Holy Spirit teach me, {literally}.

The only other encounter of any significance was when I cut a piece of lumber at the west end of the basement with a skill saw. All of the dust traveled to the east end of the basement and contaminated all of the seams in the eight foot section being wet with flux. The problem was that every time I’d try to solder; the solder would form little hot balls that would scatter every where spitting and crackling like cold water in a hot frying pan, attaching themselves everywhere. It became almost impossible to run a finished seam of solder uniformly and smooth as it should be. Decontamination proved to be a unique experience all by itself. But the fruit of perseverance is always worth while and more than pleasing. God knew exactly what He was doing and the cross was finished and installed on May 7, 1991.

Praise Be To God.